The artist’s doctoral research focused on the development of the nude in contemporary art, and more especially on its direct links with pornography. Were the boundaries of ethics being abolished through a widespread use of the obscene ? In addition to moral and aesthetic issues was raised the problem of the representation of the human body in art when the image substitutes for the living model, merging with the issue of whether to focus on the person rather than on the prototype (interconnection with sociological and ethnological backgrounds).

Those practices questioned the consequences of the mise-en-abyme (image within an image) of the human body’s development in our hegemonic artwork culture.

The works dedicated to the artist’s doctoral research have been gathered within a triple triptych shown only at the University of Paris, during the viva of his thesis, on a 14x2,20 meters area, that is 45 works in chalk presented in the form of photorealistic fragments. They are not shown here, because their contents are aimed at consenting and informed adults.

First stay of 4 years in East Africa, in the Indian Ocean – the Union of the Comoros (Mayotte, now a French department), to carry out an educational mission in the field of visual arts. 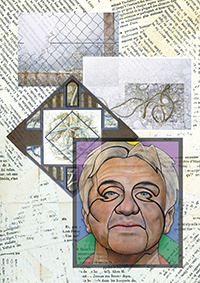